I got to head over to the US for work recently for two weeks, on in Seattle and one in San Francisco. First time I'd been over there and I found it funny how similar it is to Australia, yet different in subtle ways.

Flew into LA before making the connection to Seattle - about 14 hours I think. I was amazed at the size of the city, as we descended the carpet of lights stretched as far as the eye could see. There's nothing like that in Sydney. Caught up with friends first thing after checking into our Seattle hotel. We just bumped into them randomly on the street, Seattle's downtown area is not huge and they'd heard which hotel I was staying in. Went and tried my first American beer and also tried authentic poutine (fries, cheese and gravy) Canada style. Seattle is close to the Canadian border in the North West corner of the states. Like I mentioned above, there were lots of subtle differences between the States and Australia that alluded to the different heritage of the countries. Some things I found interesting: Seattle from up high Seattle from down low - really low.

As part of our week there I went with my coworkers to an "underground" tour of Seattle. Underground is in quotes there because it's not really an underground tour per sé, it's a tour through what used to be the ground floor of the city.

They had a lot of issues with flooding, sewerage etc, and then when half the city burned down (thanks to, as I said above, everything being made out of wood) they rebuilt it one level higher than before. It took them time to do this though, so by the time it was done all the shops had entrances still on the ground floor. What they ended up doing was paving over the sidewalks, creating two levels of sidewalk; one subterranean, one above-ground. In a city that has rain more days than not, you can imagine it would be quite handy to go from shop to shop entirely under street level.

They used the underground streets for a time but eventually they filled with rubbish and crap and became home to rats, causing an outbreak of the bubonic plague. The bottom floor of the city was officially condemned, the staircases blocked and sealed off and the rats left to die. It was about 50 years ago that they un-condemned it and allowed tours to start going through. Below is a gallery of photos showing some old shopfronts, inside a tavern, and through various underground streets.

A few other random notes about Seattle

Weed is legal, a friend of mine who lives there took me to see the dispensaries. It's crazy how professional they are, with consultants who can tell you exactly what to do - depending, of course, on whether you want to get a head high buzz that lifts you through the roof and into a creative trance, or get your face melted off and become one with nature and/or your couch. Their words, not mine. Below is a photo of some kind of chocolate treat that for $34 that I can only guess must be pretty damn strong.

Only tangentially related to Seattle, as Amazon's in Seattle and this is about the CEO of Amazon, but how crazy is this animation.

They have a salmon staircase in Seattle - I thought this would be something less interesting, but it's exactly what it says on the tin, a staircase made for salmon to climb up. The river there is part of the annual migration path of huge amounts of salmon. When they dammed it off, the salmon could no longer get upstream to spawn and started dying. To fix this, they built a literal set of waterfalls for the salmon to jump up past the dam. This is one of my favourite examples of 'man remaking environment to help animals'. Some others are the crab bridges on Christmas Island in Australia or the bio-corridor bridges going over some highways, pics below. It is of course worth remembering that we only had to do this because we fucked up the habitats in the first place.

Starbucks headquarters is also in Seattle - thought the huge mermaid at the top of the building was worth sharing. As well as the Amazon headquarters of course - below is a picture of biodomes under construction, next to their eventual concept. Seattle was great and reminded me in a lot of ways as a city with Melbourne's laid back feel but Sydney's business centre and opportunities (with Amazon being there). I can't wait to move over there within the next year or so.

Well this is interesting to read. Little did I know it at the time but I ended up moving into management in Sydney and doubling down on Australia instead of moving. I also fell in love with Japan, taught myself the language, and as of this writing intend to move there some day instead. On a less important note, the spheres are finished and look a bit different in their construction, most notably there are 3 instead of 2. Something to do with a pair of balls in front of a skyscraper looking a bit suggestive, I imagine. 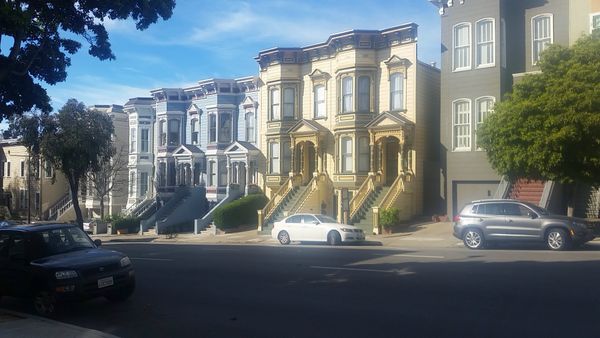 The second week of my time in America was spent in San Francisco, or at least the Bay area. I was staying and working in Palo Alto most of the week, a city

The Theory I've occasionally had people ask how I manage to get so much done - how I read so much while also working full time, doing uni part time and working on