I got a bit 'templed out' in Kyoto - while the many temples and shrines scattered through Kyoto are beautiful, I was craving variety by the end of each day[1]. To top it off, they all close at 5pm, so in a city known for the beautiful temples and shrines, I found myself wondering what else there was to do in Kyoto.

Here are a few of the things we found to occupy ourselves in Kyoto after twilight fell.

GEAR is a wordless performance that almost defies classification. The premise is that - I'm not making this up - a doll in a deserted factory somehow comes alive, and the remaining robots in the factory compete over her attention, each with different skills like break-dancing, magic, juggling or.. miming? Regardless of the odd premise, I was surprised by how much I enjoyed watching this show. It contained some genuinely moving and funny moments, in a set dripping with atmosphere. The food in Japan is always amazing, so you'll want to make the most of Kyoto's many food districts in the evening.

Pontocho is an alleyway near the river, with many restaurants offering riverside deck views as you eat, and a huge variety of cuisine. We particularly enjoyed the Gyoza places in this area. Katsukura is a chain of Katsu restaurants which you should stop by (katsu being crumbed, fried food), and underneath Kyoto station is a section known as 'Ramen Street,' if ramen is more your thing.

Gion is Kyoto's famous Geisha district, and a great place to go after the sun sets. Being a Geisha has fallen out of vogue, and their population these days is in steady decline, with few high school students deciding to follow the path of the Geisha after graduation. Gion is one of the few places in Japan that still trains real Geisha in the original tradition, and the whole area resembles something from a few hundred years ago, in stark contrast to the neon shopping streets nearby. There are a lot of washoku (traditional Japanese cuisine) restaurants in the area if you're into that. Shannon and I skipped eating in Gion for budgetary reasons, but we still had a lot of fun just wandering the quiet alleys and drinking in the sights. During certain times of year there are light shows all around Kyoto at night, to celebrate the beauty of the season. Usually these are just lights shone up at the blooming sakura trees, but they serve as a focal point for people to congregate and party. I haven't been lucky enough to be in Kyoto at the right time of year to see these, so I can't recommend a specific place to go, but I'm sure the details can be found easily on google.

Ok, I cheated, this one closes at 5pm, so it's not something you can do after dark. However, it is something to do in Kyoto that doesn't involve a zen garden or quiet contemplation, so worth including for a bit of variety.

The Rail Museum capitalizes on Japans fetish for trains. It's a huge building with many refurbished carriages of old train models, interactive displays, and a lot of detail on the history and engineering of Japans rail systems, high speed or otherwise.

I had a lot of fun wandering around the museum for a few hours and could have spent twice as long there. There's even a full train simulation that you can take part in and act as a train driver. The one downside is that many exhibits have only a single sentence or label in English, but paragraphs of detail in Japanese for the same exhibit. My Japanese is good enough to work most of it out, but it was still a little disappointing - if not unexpected - that more English translations weren't included. It was really cool seeing the evolution of train design over the years, and discovering all sorts of train trivia. For example, the design for the first shinkansen (rightmost train in above image) was inspired by the front of a plane.

Then there are the more recent and sleek '500' series, and finally the duck billed 'N700' model in usage today, as shown below. For more information for 'densha otaku' - train nerds - see here: https://www.japan-talk.com/jt/new/list-of-shinkansen-trains I've marked all the above places on the map below. Kyoto is well connected by train, bus and bike, so you won't have any trouble getting around. Drop a comment below if you want more details on any of these. 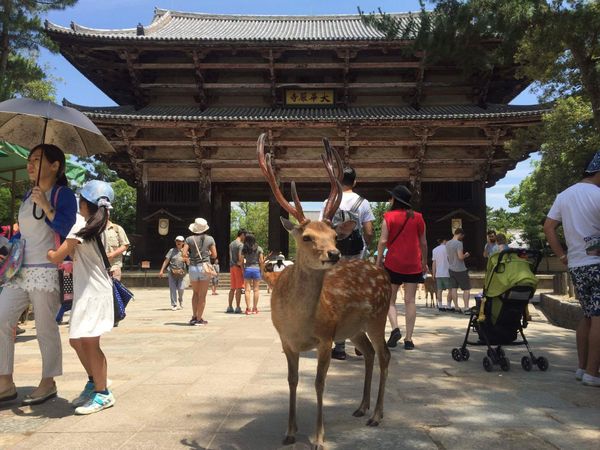 Nara is a city near Osaka and Kyoto. Nara is famous internationally for the deer; they live wild in the city and especially in the huge Nara Park.

Stochastication
—
Things to do in Kyoto at night
Share this