It feels a bit surreal to be saying goodbye to somewhere that was home for almost a decade. Consciously, I know I'm moving, but it's like my subconscious hasn't quite cottoned on, that there'll be no more afternoons studying at Coffee Pitt, no more post-work beers at Sweeney's, no more cheap pre-made salads from the supermarket, no more good old, Aussie-style schnitzels with gravy, or even just quiet nights watching YouTube with the Sydney CBD skyline out the window. Hopefully by the time my subconscious catches on, it's too busy looking forward to the next bowl of ramen.

Having a return ticket gives me a reminder, tucked away in my emails and the back of my mind, a reassurance that it's not forever. Even when I went on exchange to France I had a return ticket in hand and whenever I had a shitty time (don't get me wrong, there were a lot of great times too) I could suffer it and remind myself that it was only temporary.

This time is different. For some unknown time period between a year and forever, Japan will be my home, and I'll have to learn to truly accept the culture for what it is, or bounce off Japan within a few years like so many other foreigners. Many people that head over, rising suns in their eyes, find that Japan isn't for them. The real Japan is so different from the Japan you can experience on holidays, or the picture many people build up in their head of the land of anime and ramen. The real Japan is a place that can be frustrating to foreigners that come in with the wrong expectations, with its inflexible ways, its people - polite on the surface, but guarded underneath - and its love of paperwork. When you tell a local that you're living in Japan, one of their first questions is 'when will you go home?' - not because they want you to leave, but because there is an assumption that most foreigners won't truly assimilate to Japan and make it their permanent home. That possibility is a little daunting. As much as possible I've tried to educate myself on the experiences of others, and prepare my expectations appropriately, but ultimately, you can never know until you experience it yourself.

The move to Japan started to seem inevitable at some point. It crept up on me, and shook things up without me noticing it was happening. I started learning the language because I had a great holiday there and wanted to be able to communicate better with the locals - and sure, maybe move there some day. But while I thought to myself "this would be a cool place to live for a while" I didn't really take the idea too seriously. I just took on the language studies as a fun hobby, and to see how it went. Sometime during my second year of study it flipped from 'I'm studying Japanese because I'm interested in moving there' to 'I've spent so much time on Japanese so I want to move to Japan and make use of it' and then a year later it went from 'I want to move to Japan' to 'I'm going to move to Japan'. But why?

I've had what seems like a hundred conversations where people ask me "why Japan?" and I give a slightly different answer every time. There are so many different reasons that it's hard to pinpoint one and my answer depends on what pops into my head first. I want to use the language I've spent three years studying, of course. I want to expose myself to challenges that will make me a better person. I want to learn more about a culture and country so fascinating and so very alien to the one I grew up in - see earlier posts on this blog for some of my past experiences in the country. I want to see more of the globe in general, and Japan is a much more central base than Australia from which to travel.

But really I think what it comes down to is that the opportunity landed in my lap - a potential employer asked me if I wanted to move - and I could think of more reasons to say yes than no.

Anyway that's where I'm at today. I left my job at Amazon a month ago, and I'm taking on a new role leading a team at indeed.com, adapting the product to compete in new markets (read: Japan). I'll be starting in a month, and I have a lot of free time until then. If I'm lucky, I might even be able to publish a few more blog posts. I hope at the very least to publish a few about my language learning journey, and the things I learn from this whole new experience.

But first - navigating the nightmare that is the Japanese bureaucracy to open a bank account, find an apartment, and set my feet on the ground. Until next time, wishing everyone a happy and fruitful start to the new year and the new decade. Here's hoping the 20's are as peaceful and productive as the teens. Or is it the '10's? At least now I know what the heck to call the decade. 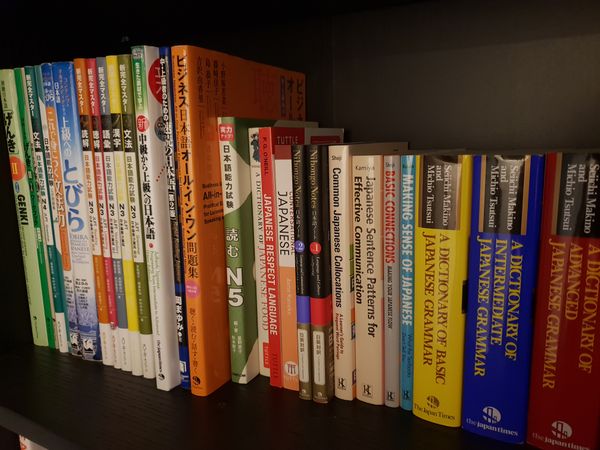 I've been studying Japanese for just over 3 years now. I last wrote about it 2 years ago, so it seemed like a good idea to revisit and reflect on my progress.

The first time I went to Japan I broke my smartphone cover and my poor wee Android Samsung Galaxy S7+™ was left shivering, naked in the cold.