I spent two weeks last month in the US for work, not the first time I've done so if you remember a post from last year. I've been pretty busy with work, actually, part of why I've dropped back to fortnightly posts.

I was pretty stunned coming in as the city that everyone always describes as raining 300 days of the year actually had snow! This sign was not far out of the airport, goes to show certain industries are evolving in Washington. If you can't make out the words, the sign gives directions to 'SEATAC AIRPORT'S CLOSEST CANNABIS SHOP.' Something struck me about this image as I was walking past as very American... feeling... descriptive I know. I can't put a finger on it exactly but an old lady feeding birds in a parking lot like this just isn't something I'd expect to see in Sydney. Melbourne, maybe. Clam Chowder, a classic meal that I've only ever had the chance to eat when stateside. Crossing more restaurants off my 'American Fast Food places' list, Mick took me to Applebees for a feed. These biospheres were under construction last time I came - they're looking a lot more complete now! I went for a hiking trip with my Australian turned Seattle-side friends Chengzhe and Mick. There'd been a frozen waterfall formed that might only last a few days, near a place called snoqualmie, and we thought it was worth the trek to see it. That was the first week, or at least the parts of it I took photos of. Not shown - a few nights out drinking with workmates and shopping. I spent the free day I had wandering around shopping (The list of requests from friends and girlfriend was not small) and somehow ended up in Japantown for lunch: I tried to order in Japanese - I've been learning it for almost 6 months now, something I'll expand upon in another post - but the waitresses were American and didn't speak it.

I met up with two friends Owen and Sunethri during the week, first time in four years for Sunethri who I haven't seen since I was on exchange to France. Owen I've managed to catch up with a few times now, one of those rare lasting friendships that you manage to maintain after finishing exchange. And finally the view back in over Sydney. I was pretty busy with work so that really is all the sightseeing I did. Still, it's always a pleasure going there, hopefully after a few months of Trump it will still be nice next time I go. I've been learning Japanese for the last six months and I'm writing a couple of posts on how I'm going about it. My aim is both to help others who want to learn 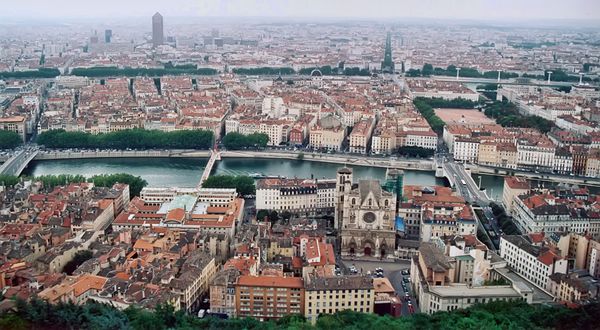 I've been asked about my experience living in Lyon and whether I recommend exchange. I thought it was worth writing down. Pros Exchange in general These are true of any international exchange You